How do I get more efficient? 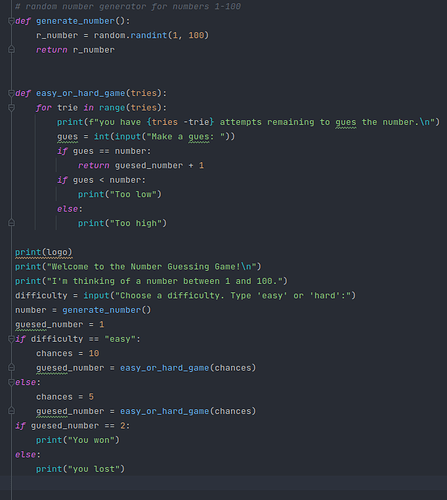 Hi guys, I’m now 11 days into the 100 days of codding challenge.
My code works , but i wonder how you guys got more efficient?
whats considered a good code lay-out, …

if you learn at home, who checked your code ?
what could be better?

Please don’t post code in screenshots. Paste the code and wrap it in triple backticks to preserve the formatting:

Even better, add ‘python’ tag to get some syntax coloring.

I recommend you to go through this topic. You will se a lot of useful information there:

This is either my first or second Python project, and I’m still learning how to program. I’m finding it challenging to comprehend classes and methods in terms of programming in general. Is it possible to make this code more concise or efficient? Can I change it to Rust without being concerned about low-level programming? """Add the converted number to the current time. Plus, a basic calculator. This is the result of two projects merging The second project is a basic calculator that uses regex…

My suggestions for your code:

the result in a variable and use it directly in the the following if statement.

Wow, thanks for the detailed suggestions ! i will loook trough the topic you send .

Function name
i think i did easy_or_hard because i knew there were only two ‘modes’ . but i know what you mean, something i will keep in mind for my future projects.

Global variable
yeah , i know that global variable is not the way to go. but i was getting frustrated or something. coudnt figure out why my code wasnt working. so then this solution came up.

guesed number was indeed to check if the number was guessed correctly.

i will work on these subjects, really helpful to bring my mistakes under the ‘microscope’ with you !
i really appreciate it

I am glad that I could help you.

if i understood right, docstrings are used to define what the function does right? so anyone (including myself) know what it supposed to do.

Yes, of course they are important for others to be able to understand the code in reasonable time. You will see their usefulness after you check your own code few weeks or months later.

Docstring are even more important in libraries. Where you do not usually want to study the implementation, you just want to know how to use them.

Python has useful recommendations about how should docstrings look like:

I personally use Google-style docstrings - they define more details how they should look like:

Editors like VS Code, PyCharm, JupyterLab will show you the docstring as a pop-up helping you while writing the code.

It is normal that you decide only later that you should rename a variable, function or a class. If it improves readability of the code you should certainly do the renaming. In VS Code it is easy (in PyCharm probably too) - just move cursor to the variable and press F2. The symbol will be renamed in all the places it is used. (Different symbols of the same name will not be touched.)

made a new programm, is this somewhat better?

In check_resources’, using the dict’s .items method would be better.

In reboot, there’s no need for reboot to call itself. Also, you really want to say is True; it would be better to have if resources_available:.