A common pattern in URL design is to omit the file extension for pages, as this both makes the URL look nicer and makes it technology agnostic (it doesn’t matter if the page is written in PHP or HTML, the technology can be changed without the link changing).

The motivation for this change is the common use case of the python HTTP server for static website development, especially amongst those learning HTML/CSS, or on restricted systems where additional software is not able to be installed. This change allows them to use the best practice of omitting extensions in links and still having navigation between multiple pages working which in my view aligns with the goal of http.server to be a simple test/demo server used while in development.

Concerns about security were raised regarding this change, however I do not believe there is any significant increase in attack surface here.

The only case I can see this being an issue is if something relies on a particular URL returning a 404 error, and instead gets served a page, however I can’t think of any realistic scenarios where this should be the case. There are some challenges around when to resolve a directory rather than a file however.

I don’t think this is really right for the vanilla -m http.server super-simple server. It should be pretty easy to do this with your own script (subclass the request handler and add your code there), but given that this isn’t meant for production work anyway, it’s never going to be able to do everything that you want it to.

Maybe this would be better done as a recipe in the docs, showing how easy it is to extend the basic functionality?

I guess it boils down to what we think the http.server module should be. For me the use case is almost entirely manually running python3 -m http.server. My common use cases are as follows:

http.server usually isn’t the 100% best tool for the job, but it is readily available, as pretty much all computers I use have python installed, and as such it is good for these quick “hacks”. I’d like to improve it for my particular use case, and I don’t see a drawback to this change. (My implementation is less than 15 lines of code.)

Quick file transfers are a great use-case for this, since it strictly just returns files from the file system. For the other use-cases, if changing your URL is too much of a hassle, it’s pretty easy to make your own Python script that imports http.server and makes its changes; you can then leave that script in your personal library and use that instead of python3 -m http.server.

The problem is that your use-case requires one small tweak, and someone else’s will require another small tweak, and so on, and the parameter list would quickly become untenable. The classes in http.server are designed to be extended, so it should be easy to create the functionality you want.

I’m indifferent to whether this gets added (I suppose I see some narrow use case) but I do think it should not be the default and should require specifying a flag. I know that the patch still prefers exactly matched file over html/htm file but I still don’t like the possibility of getting a different file than I requested because there happened to be a file with that name but htm/html suffix added.

How do you use http.server?

And merry Christmas to those who celebrate it!

I use it mainly for web dev, but I still think it’s better to not have it.

For comparison, GitHub Pages does something similar: 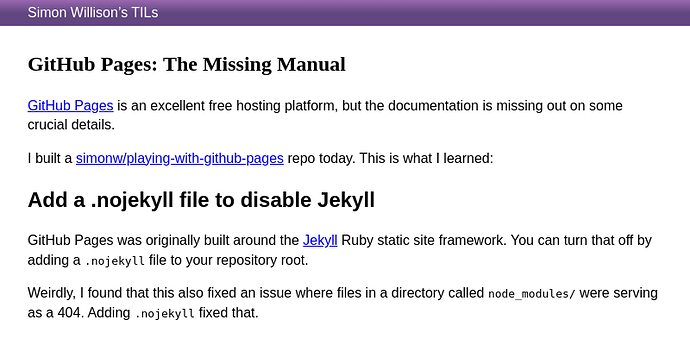 [GitHub Pages](https://pages.github.com/) is an excellent free hosting platform, but the documentation is missing out on some crucial details. I built a [simonw/playing-with-github-pages](https://git

GitHub Pages does a lot that http.server doesn’t do, including parsing Markdown into HTML