I just took over maintainership of docopt-ng, which is a jazzband-maintained fork of the popular but abandoned docopt.

When fork was originally forked, they distributed it as docopt-ng (ie pip install docopt-ng), so as not to clash with the existing docopt. BUT, they made what I think was a tragic decision to keep the package name the same, so you still import it as import docopt. This makes it impossible to install both libraries in the same environment, since you don’t know which docopt you get when you import docopt.

What are the solutions here? I assume it’s to do a breaking change in a 1.0 release and change both the distribution name and package name to something like docopt2. Do you know of any projects that have done this, so I could see how that went and maybe learn a lesson or two? Any other advice?

When docopt and docopt-ng are in the same venv, docopt takes precidence

If you install ```pipenv install pipreqs pip-upgrader docopt-ng``` Which somet…imes happens, you can't put everything into system or pipx. Then apps use the wrong docopt. ``` $ python >>> import docopt >>> docopt.__file__ 'C:\\Users\\matth\\.virtualenvs\\demo_doc-j-5bRj6B\\lib\\site-packages\\docopt.py' >>> exit() $ pip install docopt-ng Requirement already satisfied: docopt-ng in c:\users\matth\.virtualenvs\demo_doc-j-5brj6b\lib\site-packages (0.7.2) ``` In C# there was a way to handle this and ensure that two similarly named dlls weren't confused with each other, I don't know what the python way is to handle this scenario.

After a few days and maybe dropping in docopt-ng for some popular projects that …use docopt, I'm hoping to do a 1.0 release - slightly breaking semver, but with 100% coverage I think the project deserves to be pulled out of "beta".

You could distribute a shim docopt module that just wraps your renamed docopt_ng or etc, and raises a deprecation warning – that would allow a longer transition period. Not sure what you are referring to by changing the distribtution name, I assume you’d still pip install docopt-ng?

Not exactly the same situation, but skimage · PyPI is an example of a shim / dummy package for scikit-image · PyPI (imported as import skimage).

On the other hand opencv-python · PyPI (imported as import cv2) does not have any such shims.

Both seem very confusing, inconvenient, and potentially dangerous (supply chain attacks), but will probably never be fixed for practical reasons.

A prominent example of a similar situation is Pillow, an imaging library. It originated as a fork of PIL, but even now, more than a decade later, it is imported with “import PIL”.

Ask for a claim to the name on PyPI if abandoned.

The shim module is a good idea, if I change the name then this will probably be the route I follow.

A prominent example of a similar situation is Pillow, an imaging library. It originated as a fork of PIL, but even now, more than a decade later, it is imported with “import PIL”.

Great point. So that’s evidence that just keeping things exactly how they are is feasible.

Ask for a claim to the name on PyPI if abandoned.

The original docopt is too popular still to pull the rug out from underneath all the folks still using that.

One downside of renaming is splitting the audience. Many, many users/libraries don’t update to the new name and keep using the old one.

If you create a new docopt2 package, expect another big drop in users.

My advice is to keep the names you have, to best serve your users.

I would even consider claiming the abandoned docopt name (see PEP 541) and re-start using that as the canonical name (with a shim for the fork).

The original docopt is too popular still to pull the rug out from underneath all the folks still using that.

This doesn’t do that at all; rather, it benefits them by allowing them to take advantage of your maintenance and improvements (if they choose) without having to switch to a totally new distribution package. If its been over a year since the last release and the maintainer can’t reasonably be reached (or can and okays it), then it can be all yours.

docopt-ng has several breaking changes as compared to docopt, plus the versioning is going to be inconsistent between them, so if someone’s requirements.txt, still saying docopt, suddenly begins pointing to my fork, then their code is going to inexplicably break. Unless I’m missing something that you’re saying?

I think that’s perfectly acceptable as long as you do a major version bump. In fact, I think this is the right thing to do.

docopt-ng has several breaking changes as compared to docopt

If docopt development had continued, it would inevitably released a new major version with breaking changes, unless its goal was 100% backward compat with every previous version of docopt forever. Therefore, what you would be doing is no different form the original project, if it was still being developed (or development resumed at some point). That’s what major versions are for in semver, and many projects release breaking changes without even doing that.

plus the versioning is going to be inconsistent between them,

Yes, of course, but you just make your first new release to the existing PyPA project name a new major version relative to the current docopt version.

if someone’s requirements.txt, still saying docopt, suddenly begins pointing to my fork, then their code is going to inexplicably break.

If they haven’t upper capped it to at least the current major version, yes, but the same would be true if and when the original docopt authors released a new major version with breaking changes, and that’s on them, not yet. And its not that; inexplicable, if they aren’t upper capping their dep versions properly, then their library/application would almost certainly broken before due to breaking changes in a dependency.

Releasing a pre-release (alpha, beta, rc) could help devs ensure their versions are either upper capped or compatible, assuming they are paying attention as they should.

OK, thanks for the input. I emailed the original maintainer of docopt to see what they think about transferring the name on PyPI. Hopefully PEP 541 doesn’t have to come into it at all!

I also support the idea of name transfer or PEP 541 (if necessary). It’s in the best interest of users and the supply-chain who may have an unsupported dependency without awareness. Having a fresh maintainer come along is healthier, even if it does temporarily break certain unpinned builds because it highlights to the user that they have 2 options: update their code to a new supported version or pin to an unsupported version.

I just stumbled upon another example of an abandoned project that was picked up by a new fork and published to the same pypi name. 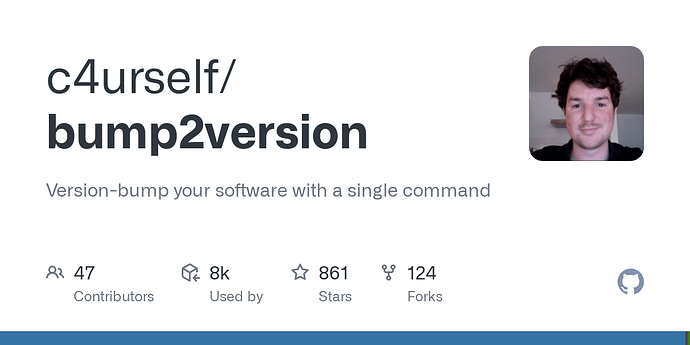 Version-bump your software with a single command. Contribute to c4urself/bump2version development by creating an account on GitHub.

I know this is all internal and I’m free to do what I want, but in the wild is the recommended to add a barrier to using the unmaintained package? Or is renaming Python modules preferred to keep compatibility? I guess there’s more factors, such as security and necessity for change

@hugovk has recently done some great work picking up maintenance of the previously abandoned termcolor and transferring the pypi name. Take a look here.

### Project to be claimed `termcolor`: https://pypi.org/project/termcolor …### Your PyPI username `hugovk`: https://pypi.org/user/hugovk ### Reasons for the request I believe the project has been abandoned: * Last PyPI release Jan 13, 2011 https://pypi.org/project/termcolor/#history * No homepage or source repo * I emailed the single listed maintainer on 20 June, but no reply (email didn't bounce) * Cannot find maintainer on GitHub or online elsewhere I wish to make some improvements: * Release a wheel: termcolor is one of only 6 on this list without a wheel: https://pythonwheels.com/ * Add support for [`NO_COLOR`](https://no-color.org/) and `FORCE_COLOR` env vars * Add type annotations * I don't intend large changes. For more complex colour control, existing libraries such as [Rich](https://github.com/Textualize/rich), [Blessed](https://github.com/jquast/blessed) and [Colorama](https://github.com/tartley/colorama) are a better fit ### Maintenance or replacement? Maintenance ### Source code repositories URLs * Current project: no code repo * Fork: https://github.com/termcolor/termcolor ### Contact and additional research I emailed the current owner at the Gmail address listed at https://pypi.org/project/termcolor/ on 20th June, but received no reply. The email didn't bounce. I've searched for other online presence/email addresses on GitHub, Bitbucket and via Google but didn't find any. ### Code of Conduct - [X] I agree to follow the PSF Code of Conduct

Similar could be done with docopt.

For the first revived release, I bumped the major version.

I tried to avoid backwards incompatible changes, beyond:

Also re-organised source structure, switched from setuptools to hatchling, and some other modernisation, which shouldn’t be backwards incompatible

. And didn’t add too much, it’s the first release in 11 years(!) so we don’t want cause problems.

If there were to be major changes (none planned), they would come in future major bumps with deprecations where appropriate, but after this one had safely bedded in.